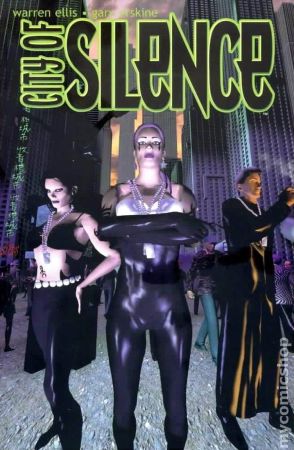 Collects City of Silence (2000) #1-3. Written by WARREN ELLIS. Art and cover by GARY ERSKINE. The future is bad for you. In a place where everyone has the technology to create brand-new, weird sciences ten times a day, there are policemen who will hunt you down for having a bad idea. They are the Silencers. And the investigation of a dead kid with a silicon pentagram on his neck opens up a whole box of bad ideas upon a city that only survives through silence. Collecting of the critically acclaimed miniseries from WARREN ELLIS! Originally created and produced in the mid-Nineties and prefiguring his Transmetropolitan in its approach and themes, CITY OF SILENCE is among Warren Ellis' (The Authority, Planetary, Ministry of Space) first work for American publishers with artwork by GARY ERSKINE (The Authority). Never before collected into one volume, this tech-noir masterpiece has waited patiently for the times to catch up with it. Now, it's finally run out of patience. PLUS: Special pin-up gallery featuring artwork by CHRIS WESTON, DOUGIE BRAITHWAITE, JOHN McCREA, ANDI WATSON, STEVE PUGH, SIMON FRASER, DOM REGAN, KEV HOPGOOD, JON HAWARD and MATT GREG. Softcover, 104 pages, full color. Mature Readers Cover price $9.95.