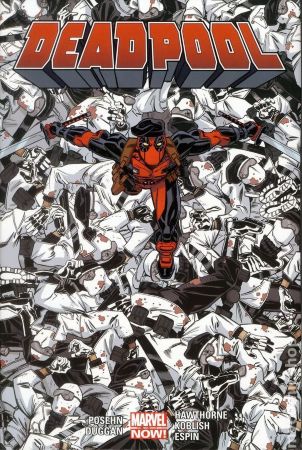 Collects Deadpool (2012-2015 3rd Series) #35-44 and #250. Stories by Gerry Duggan, Brian Posehn, Mike Drucker, Paul Scheer, Nick Giovannetti, Ben Acker, Ben Blacker, Scott Aukerman, Jason Mantzoukas and Matt Selman. Art by Mike Hawthorne, Scott Koblish, Salva Espin, Jacob Chabot, Ty Templeton, Juvann Kirby, Natalie Nourigat, Mirko Colak and Terry Pallot. Cover by Scott Koblish. It's the end of the road for the Merc with a Mouth! First, our red-clad hero is stalked by a classic Spider-Slayer! Wait, this isn't a Spider-Man book. Deadpool had better find out what's going on before it mashes him into spider-paste! Then, inverted by the events of AXIS, Deadpool puts down the guns - and goes Zen! So how can he possibly save his friends from an attack by the also-inverted X-Men?! In the aftermath, Deadpool takes a relaxing vacation to the Middle East, clashes with Omega Red, journeys into the Tomb of Scariness with Shiklah and battles the revenge-crazed ULTIMATUM organization! Oh, and he dies at the end. Is that a spoiler? Plus: a slew of bonus stories, including one final flashback feast in which Deadpool gets his hands on...the Infinity Gauntlet?! Hardcover, 304 pages, full color. Cover price $34.99.