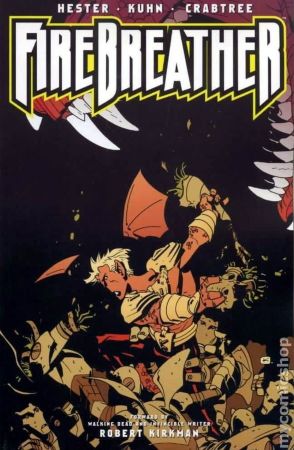 "All Best Heroes are Orphans!" Collects Firebreather (2008- 2nd Series) #1-4 and Firebreather: The Iron Saint (2004). Written by PHIL HESTER. Art and cover ANDY KUHN. Following a carefully negotiated custody agreement overseen by the U.N., Duncan and his mother settle in a quiet little town in Utah. After a tumultuous assimilation into the local high school, a violent confrontation with a creature from his father's past, and a courageous stand against his father Belloc, Duncan's life gains a semblance of normalcy. That is, until a mysterious stalker begins to hound his every move, his high school crush rejects his affection, and his father asks him to commit the unthinkable. Softcover, 160 pages, full color. Cover price $16.99.