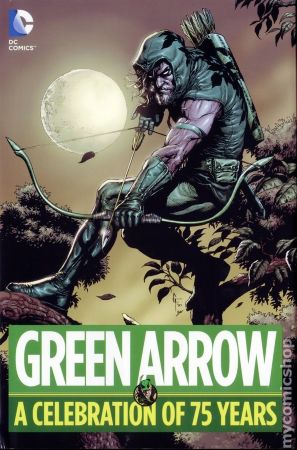 Written by Mort Weisinger and Various. Art by George Papp and Various. Cover by Gary Frank. Armed with only his bow and quiver, Oliver Queen has been targeting the criminals of the DC Universe for 75 years as the Green Arrow. First appearing in 1941 as a 20th-century Robin Hood in a tale by Mort Weisinger and George Papp, the Emerald Archer has grown to be a wisecracking, hot-blooded, and sometimes radical counterpoint to more straight-laced superheroes. This collection features the Green Arrow in all his many forms, from the zany, boxing-glove-arrow-wielding adventurer of the Silver Age to the gritty urban vigilante of the 1980's and beyond. This volume is a crash course in the history of the Battling Bowman from origin to death to rebirth, featuring an all-star cast of comics talent including Mike Grell, Dennis O'Neil, Neal Adams, Jack Kirby, Alan Moore, Kevin Smith, Phil Hester, Brad Meltzer, Amanda Conner, Jeff Lemire and more. Celebrate over seven decades of Green Arrow's crime-fighting career, including appearances by his allies Green Lantern, Black Canary and more! Hardcover, 400 pages, full color. Cover price $39.99.