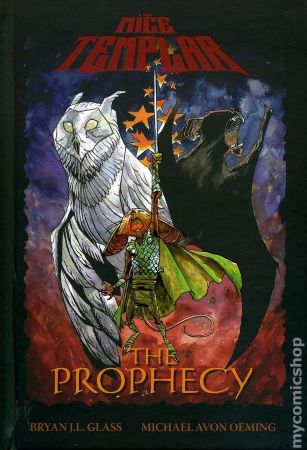 "The Prophecy!" Collects Mice Templar (2007) #1-6. Written by BRYAN J.L. GLASS. Foreword by Bill Willingham and Mark Buckingham (Fables). Art and cover by MICHAEL AVON OEMING. Before their fall, the Templar preserved the order of the natural world, maintaining th balance of life and death for all creatures. But an ideological dispute pitted the noble brotherhood against itself, where they destroyed themselves in a vicious civil war. Chaos descended in their wake, where predatory and scavenger creatures now reign supreme bringing anarchy to the night world of Shadow Time. Yet the young mouse Karic receives visions from the gods that their creator Wotan has chosen him to challenge the imbalance and restore the order of the fallen Templar. And thus begins the first chapter in an extraordinary adventure of magic and wonder, faith and valor, and of one small mouse whose destiny might change the entire world. Hardcover, 7 1/2-in. x 11-in., 200 pages, full color. Cover price $29.99.