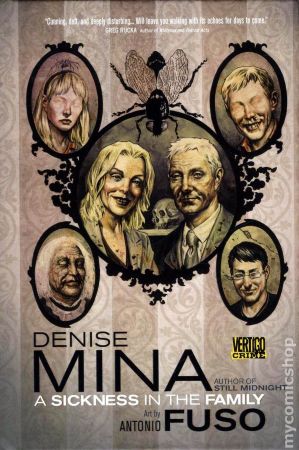 Sickness in the Family HC

Written by DENISE MINA. Art by ANTONIO FUSO. Cover by LEE BERMEJO. Denise Mina, award-winning crime novelist, brings her psychological style of crime fiction to Vertigo Crime. Meet the Ushers. The parents, Ted and Biddy. Grandma Martha. The three kids, William, Amy and Sam. Just a normal, middle-class family gathered around the table on Christmas Day. Until they start dying. Violent deaths. One by one. Is there a curse on their house, as a recently unearthed history of witchcraft in the area would suggest? Or has one member of the Usher clan declared open season on the rest? As secrets and resentments boil to the surface, it becomes clear that more than one Usher has a motive for killing off the others. But in the end, the truth turns out to be far more shocking than anyone in this ill-fated family could have imagined. Hardcover, 5 1/2-in. x 8-in., 192 pages, B&W. MATURE READERS Cover price $19.99.