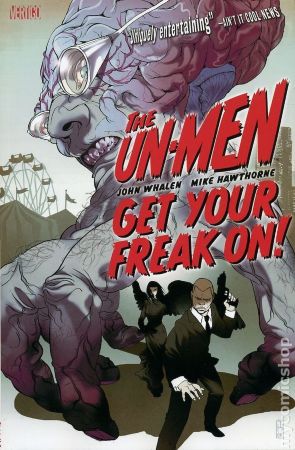 "Get your Freak On!" Collects Un-Men (2007- ) #1-5. Written by John Whalen. Art by Mike Hawthorne. Cover by Tomer Hanuka. Breakout writer John Whalen and Eisner-nominated artist Mike Hawthorne (THE EXTERMINATORS, Queen and Country) bring chilling new life to THE UN-MEN - the former SWAMP THING adversaries created by Len Wein and Bernie Wrightson - in this volume collecting the first five issues of the new series that explores what it means to be a freak in a society filled with gawkers. After a sideshow attraction called "The Gill-Boy" is murdered, an albino agent known as Kilcrop is dispatched by the government to solve the case. To uncover the truth, Kilcrop must infiltrate Aberrance, where society's most misshapen outcasts find their own kind of freedom. Softcover, 128 pages, full color. Mature Readers Cover price $9.99.